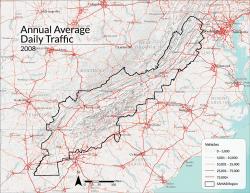 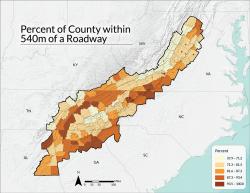 Percent of County Within 540m of a Roadway 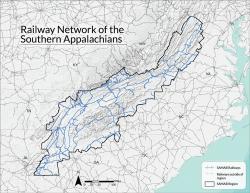 Railway Network of the Southern Appalachians 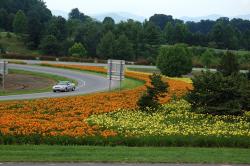 In 2013, 43 percent of Southern Appalachian workers were employed outside their county of residence, a 13-point increase from 1990. On average, travel times to work were estimated to be around 21 minutes. Commuting patterns rely upon proximity to primary roadways, which in turn are affected by factors such as terrain and land ownership. Access to other services—such as health care, schools, and grocery stores—also depends on the transportation network of an area.

The accompanying map shows the percentage of a county that is within 540 meters of a roadway. This can be an indicator of effective emergency response time to reach any particular part of a county, but also shows counties that have areas lacking access to primary transportation corridors. The majority—84 percent—of the Southern Appalachian region is within this sufficient distance to a roadway. The areas that have less access are primarily within the Blue Ridge region or are situated north of Interstate 81.

Some 15 interstate highways cross the Southern Appalachians, with each being one of the region's major transportation corridors.

Other interstate highways cross this central transportation aorta. Most of these crossing interstates connect with major metropolitan areas.

All of these major interstates provide access not only for distant urban residents, but also for people living in the Appalachian region.

The Annual Average Daily Traffic map shows the average patterns of commuters throughout the region. It can be seen that Interstate 81, which connects the region with the densely populated urban centers of the northeastern United States, carries the bulk of the region's commuters, as does Interstate 75 connecting Atlanta to Chattanooga and Interstate 40 going east/west connecting Raleigh and Charlotte to Asheville, North Carolina.

Although their importance has declined over the past decades, railroads also are vital to the transportation system. Many of the railroads follow the same general routes as the interstate system, but they also provide additional access to some rural areas in the region. Most rail systems are on the western side of the mountains, where the more level terrain of the Ridge and Valley region has allowed for more expansive rail development.