Urban land is made up of areas of intensive use, where much of the land is covered by structures such as roads, shopping centers, neighborhoods, cities, or industrial facilities, for example. These more-intensely developed areas typically offer more abundant employment opportunities that attract individuals and families, provide easier access to health care for older populations, and often have a much more variable demographic makeup than their rural counterparts. Within the Southern Appalachian region, there are 22 cities with populations greater than 25,000 in or within 50 miles of the region's boundaries. The largest city—Atlanta—is located just south of the region. Other large cities in the area with populations greater than 200,000 people include Chattanooga and Knoxville, Tennessee; Greenville, South Carolina; and Roanoke, Virginia. Of the 22 cities in the vicinity, 10 fall inside the regional boundary.

Within the region, nearly 3.6 million acres—or 10 percent—are classified as developed lands; the majority of the landscape is forested (approximately 66 percent). As population increases and urban areas expand, there is concern that the wilderness resources of the region will be affected by overuse or will face competition from other land uses. 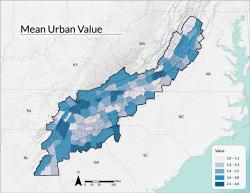 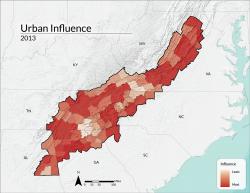 Mean urban value measures the "urbanness" of an area by combining population data models from the U.S. Census Bureau with the density of impervious surfaces (such as paved areas and buildings), creating a quantitative value of the Urbanness Index. This Index provides a relative value to all cities, towns, and rural areas in the United States, and can be used to rank all contiguous U.S. cities and towns uniformly on a scale of 1 to 9, with 1 being least urban and 9 being most urban. To give national context, the highest urban value in the U.S. is 8.873, in Kings County, New York. This is the home of Brooklyn—New York City's most populated borough. Index values at 1 would be very scarcely populated areas, such as in Highland, Virginia, which is within the SAMAB region with a value of 1.00.

In the accompanying Mean Urban Value map, the values are aggregated to provide a county-scale look of urbanness based on the primary index value within each of the region's counties. The more prominently urban areas include the counties containing or nearby major metropolitan areas such as Atlanta, Greenville, Knoxville, Chattanooga, and Roanoke. The highest urban value is 6.43 in Roanoke City, Virginia, and the regional average is 1.83—a value that would indicate that the region has a predominantly rural character.

Urban Influence, too, can indicate the urbanness of an area. Urban Influence is a measurement that includes proximity to urban centers and access to major transportation corridors to help classify a county's influence from nearby urban centers. Consider Swain County, North Carolina, on the accompanying map. The majority of the county is protected forestland, and it has both a low population and low population density. However, given its proximity to Knoxville and Asheville and having one of the country's most visited national parks within its borders, it is not given a "Least" influenced designation. Also consider the light-colored region in north Georgia and southwest North Carolina, where access to major roads is limited and there is no close proximity to major urban areas. Here a pocket of communities exist, but they are largely independent of the influence of nearby towns and cities.