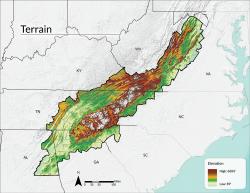 The Southern Appalachian Mountains are the oldest mountain range in the continental United States, much older than the Rockies and other western mountains. The formation of the mountain range began with mountain building between about 1 billion and 265 million years ago, with renewed uplift about 65 million years ago, and the modern landscape began to form. Over time, erosion of these mountains by wind and water has created a weathered landscape of rounded peaks and wide concave valleys.

The Blue Ridge Escarpment separates the Piedmont in Georgia, South Carolina, North Carolina and Virginia (shown in green on the eastern side of the region) from the higher elevation Blue Ridge province (shown in browns and grays) in Western North Carolina and Southwestern Virginia (see the Ecoregions section for additional information). Note how the ecoregions are heavily controlled by the terrain and elevation map. Where the Blue Ridge province is very rugged and mountainous, the Piedmont is characterized by low, rolling hills.

The Blue Ridge Escarpment generally coincides with the Eastern Continental Divide, which separates river systems that flow westward into the Gulf of Mexico from those that flow eastward into the Atlantic Ocean (see the Watersheds section for additional information). The origin of the Blue Ridge Escarpment is uncertain, but it appears to be a product of tectonic uplift and the erosive power of streams. Streams flowing eastward to the Atlantic Ocean generally are shorter, straighter, and more energetic than those flowing westward across the Blue Ridge into the Mississippi River system and into the Gulf of Mexico. Consequently, the Escarpment and Eastern Continental Divide are slowly migrating westward by headward erosion.

To the west of the Blue Ridge, the Ridge and Valley province extends from Alabama northeast across Georgia, Tennessee, Kentucky and Virginia. Notice on the terrain map how the valleys follow the shape of the western edge of the Blue Ridge province. This pattern is very noticeable on the Geology map. Regional transportation corridors follow these same valleys because of more stable geology and gentle slopes.

Note how the higher mountains in the Blue Ridge broaden into a larger area as you get into Virginia and Kentucky that crosses and includes the Ridge and Valley. This is due to a “kink” in the Appalachians, with the mountains changing from an East-Northeast trend to a more true Northeast trend. In this kink, the Ridge and Valley in narrower and uplifted more due to compression. Slopes are steeper, and roads are more difficult to build and maintain.

This terrain map is useful to compare with many of the other maps in not only the natural section, but also the built and human sections. The mountain topography has always had a strong influence on where we live and work, and it will continue to be a major factor in the future.