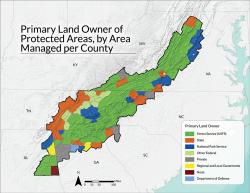 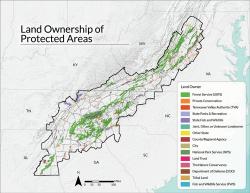 Of the 37.4 million acres within the Southern Appalachian region, 14.7 million acres—or nearly 40 percent of the total area—are protected or managed lands. Though the region has the greatest concentration of federally owned land in the eastern United States, at nearly 16 percent, the vast majority of the region’s land—over 80 percent—is privately owned, meaning that the decisions of private landowners largely determine the future health and appearance of most of the region’s ecosystems.

The region's national forests include the George Washington and Jefferson in Virginia, a portion of the Monongahela in West Virginia, the Pisgah and Nantahala in North Carolina, a portion of the Sumter in South Carolina, the Cherokee in Tennessee, the Chattahoochee in Georgia, and a portion of the Talladega in Alabama. The area also contains the Great Smoky Mountains National Park, Shenandoah National Park, Little River Canyon, and the Blue Ridge Parkway. Other federal lands are managed by the Tennessee Valley Authority, Oak Ridge National Laboratory, and the Department of Defense.

SAMAB members work with other federal land managers and state agencies to partner on projects where their management strategies align. Examples include land and water resource management, recreation facilities (such as boat ramps), wildlife enhancement, air quality, as well as sensitive, threatened or endangered species.