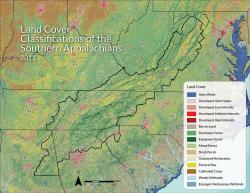 Land Cover refers to the vegetation, structures, or other features that cover the land, as opposed to Land Use, which refers to how land is used by humans. Land cover describes land covered by grass, trees, water, or large buildings surrounded by lawn. Land cover classifications are largely defined by terrain, elevation, and soil types. For example, developed areas occur mostly upon lands that allow for increased human mobility and access.

In the Blue Ridge ecoregion, most development occurs within low-lying valleys and along rivers. Development within the Ridge and Valley ecoregion is not as constrained by steep, mountainous terrain, and pasture, croplands for agriculture, or flat lands for development are more common. Higher concentrations of forest classifications, however, occur on mountainside slopes at higher elevations, where climate and elevation help to form suitable soil types for their growth, and where the steep slopes create conditions less suitable for development.

The Southern Appalachian region covers just over 37.4 million acres of mountains, foothills, and valleys, spanning seven states from northeast Alabama and northern Georgia to northern Virginia. The region is largely dominated by forests, which cover over 65 percent of the landscape. This number has declined by nearly 5 percent over the past decade; a 1996 assessment found that 70 percent of the region was covered by forest. Other land cover types include pasture and croplands, which cover 17.4 percent, and grasslands, which cover just over 3 percent. Developed areas, including roads, homes, and other human structures, have seen an increase since the 1996 assessment, from 3.1 percent to 9.7 percent—a 213 percent increase.