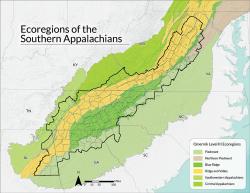 Ecoregions of the Southern Appalachians

The terrain of the Southern Appalachians is so significant in shaping its ecology that it is impossible to discuss the region without referring to these features. They account for the great diversity of plants and animals, the climate and soils, and largely for where people choose to live, thus shaping the cultural and economic aspects of the region.

The eastern portion of the region is dominated by the Blue Ridge Mountains, which rise abruptly from the Piedmont province, forming a rugged and diverse landscape. These mountains range from 2,000 to 6,000 feet and contain the highest peaks in the eastern United States. The variations in elevation, aspect, rocks, and soils produce sites that support a variety of vegetation from oak and hickory forests at lower elevations to the spruce and fir forests on the mountaintops. The wide range of climatic conditions accounts for the occurrence of many plants and animals that are at the edge of their natural range. Throughout the Blue Ridge ecoregion, much of the development has occurred within its lower-lying valleys, which were more suitable for settlement and transportation. Much of this development, however, came at the expense of forestland, cropland, and pasture.

The mountains of the Blue Ridge ecoregion formed a significant barrier to early European settlement, but once traversed, the pastures of the Ridge and Valley province helped provide the agriculture necessary for continued western expansion. Instead of trying to tame the Blue Ridge Mountains, early settlers established small farms along the central valley. With few exceptions, population centers are located within this valley. The terrain is characterized as rolling or hilly, with ridges running southwest along the length of the valley. Cropland and pastures are the predominant land uses, but forests still occupy almost half of the area.

West of the great valley the mountains and ridges of the Cumberland Plateau rise within the Southwestern and Central Appalachian ecoregions. Largely forested and rural, this region once supported the harvesting or extraction of many resources, such as timber. Large tracts of land owned by lumber and coal companies, along with dense forests, still cover about two-thirds of the area, bringing fuel for energy production to much of the region.