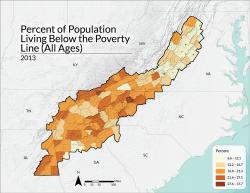 Percent of Population Living Below the Poverty Line (All Ages), 2013 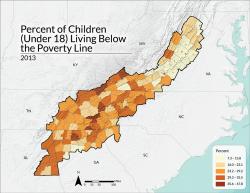 Percent of Children (Under 18) Living Below the Poverty Line, 2013 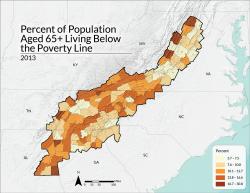 Percent of Population Aged 65+ Living Below the Poverty Line 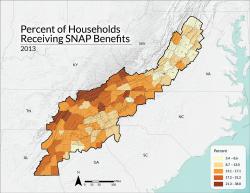 Poverty is an economic classification that refers to a condition where basic resources are lacking or where minimal levels of income are considered acceptable in a given society. High poverty rates are often associated with high levels of unemployment, and can indicate the extent to which a community is economically distressed, i.e., unable to meet basic needs.

In 2013, an estimated 18.4 percent of individuals (all ages) in the Southern Appalachians were in poverty, compared to the 15.4 percent in the U.S. This has increased since 2000, when the region saw 14.5 percent of individuals in poverty, likely in response to national recessions throughout the decade. Despite this increase, poverty has declined significantly in the last part of the twentieth century. 20 percent of families were below the poverty level in 1970; less than 11 percent were below it in 1990, and in 2013, nearly 14 percent of families fell below the poverty level.

The poverty rates for all children (under age 18) in the region are higher than those for the general population. In 2013, an estimated 25.4 percent of children were in poverty, higher than both the national (21.6 percent) rate. Largely, the disparity between the general population poverty rate and the child poverty rate follows national trends. For the region's individuals over 65 years, an estimated 10.9 percent are in poverty, compared to the 9.4 percent nationally.

Another statistic closely related to poverty rates is the percentage of households receiving benefits through the federal Supplemental Nutrition Assistance Program (or SNAP, formerly known as the Food Stamp Program). Throughout the Southern Appalachian region, 15.1 percent of households are receiving assistance. The majority of the counties with the highest percentage rates of households receiving SNAP benefits occur in Tennessee, with Hancock County containing the highest rate at 38 percent. The lowest rates are found throughout Virginia, where 18 of the state's 54 counties and independent cities that are within the region have rates below 10 percent.

In the last couple of decades, economic progress has been faster in the mountainous portions of Virginia, North and South Carolina, eastern Tennessee, northern Georgia, northern Alabama, and a piece of eastern West Virginia than the average across the seven states that contain the highlands. As the highland economy grew, it became more diverse and less dependent on manufacturing.