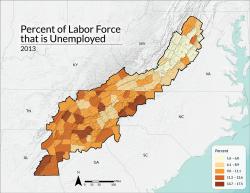 Percent of Labor Force that is Unemployed, 2013 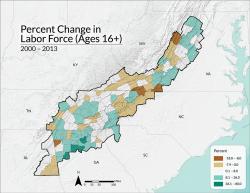 The labor force participation rate represents the proportion of the population that is in the labor force. The change in the labor force shows where individuals over the age of 16 are locating to find greater employment opportunities. From 2000 to 2013, Paulding and Forsyth Counties in Georgia have seen the greatest increase in employment, at 77 and 74 percent, respectively. Regionally, the labor force has increased by 6.8 percent.

Economic sectors that previously employed the majority of the labor force, like farming and manufacturing, have undergone significant decreases. Dominant employment sectors have shifted to education, health care, retail, and service jobs. This trend change has meant an increase in rural unemployment. Most of the jobs are now centered around larger cities in the region. The maps at right reveal this trend: with better employment percentages and lower unemployment around the counties containing the cities of Knoxville and Johnson City, TN; Asheville, NC; and Roanoke, VA. The few exceptions exist where ecotourism and/or outdoor recreation is a prevalent economic driver for a county.

Besides job availability, factors defining employment include pay levels, distance, and time to commute to place of employment. In 2013, 43 percent of Southern Appalachian workers were employed outside their county of residence; a 13 point increase from 1990. For some counties, over two-thirds of workers commuted to another county to work.