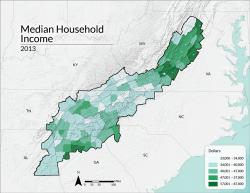 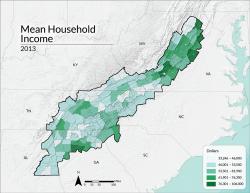 Median household income is defined by the U.S. Census Bureau as being the amount that divides the income distribution of a region into two equal groups; half of the households generate an income over that amount, and the other half with an income below that amount. It is usually perceived as a better indicator of a region’s overall income compared to a calculated average (mean), as it is not dramatically affected by values considered unusually high or low for that region.

The median income for the Southern Appalachian region is just over $41,000—about 25 percent below the national estimate of $53,000—and help to demonstrate the strong connection between income and urbanization. Typically, the higher income counties are those containing larger urban centers and have higher percentages of the population with at least a bachelor's degree. In the region, the counties with the highest median household incomes are within the greater Atlanta metropolitan area or in the counties of Virginia surrounding the more urban, independent cities.

The average (mean) household incomes for the Southern Appalachian region are also much lower than the national average, with Hancock County, Tennessee having the lowest mean income at $33,256 compared to $54,268 for the region and $73,487 nationally.

Status of Communities In Urban Counties

There is greater income potential for more people in the vicinity of cities. Urban areas in the Southern Appalachians provide more jobs for the young and better health care for the elderly, where many of the region’s smaller cities are considered outstanding retirement communities. People over 25 years of age with a college degree are more likely to live in an urban area, and an educated workforce tends to earn higher wages, exhibit lower rates of unemployment, and substantially contribute to economic growth. Adults with higher education levels are more likely to locate in places offering the widest variety of economic opportunity.