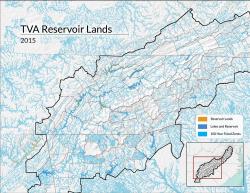 Floodplains are often described as flat areas that border a river or stream. They plan an important role in flood reduction, water quality and wildlife habitat. During high precipitation events, water in the river or stream channel may spread out over the floodplain, helping diffuse the water’s energy and reducing flood damage downstream. Floodplain management and land development are regulated at the Federal, State, and community level to prevents impacts to flood water surface elevations through no-fill areas. Flood risk and flood insurance are factors that communities face and must understand.

The Tennessee River watershed is one of the rainiest in the United States, with an average of 51 inches of rain a year. The Gulf of Mexico is a major source of moisture. The Tennessee Valley region also is subject to heavy rainfall resulting from dissipating hurricanes moving across the Southeast.

The monthly average rainfall in the Tennessee Valley region ranges from 3.0 to 5.5 inches. Typically, March, July, and December are the wettest months, and September through November are the driest.

The average annual runoff in the region—the amount of water that goes into the river system after it rains—is about 23 inches, or 44 percent of average rainfall. The monthly average runoff varies from almost four inches in March to less than one inch in August, September, and October. Generally, runoff is heaviest in winter and early spring, when vegetation is dormant and the ground is saturated. As a result, heavy storms moving across the Tennessee Valley region between December and early May become potential causes of major floods.

Given this, December through early May is the major flood season in the Tennessee Valley. Winter storms provide the most rainfall as they are generally more numerous, last longer, and cover larger areas. In over 100 years of recordkeeping, annual rainfall has ranged from a low of 30 inches in 2007 to a high of 65 inches in 1973. The greatest extremes occur in the eastern half of the Valley. Average annual precipitation at several places in the mountains of the French Broad, Hiwassee, and Little Tennessee River watersheds exceeds 80 inches. In contrast, other locations in the French Broad and Holston River watersheds average less than 40 inches a year.