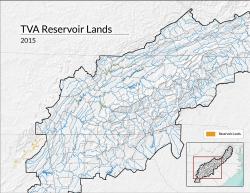 Throughout its history, the Tennessee Valley Authority (TVA) has managed public lands to meet a wide range of regional and local resource development needs and to improve the quality of life, both within specific reservoir areas and throughout the Tennessee Valley region. Public lands adjacent to TVA reservoirs and adjoining private lands have been used for public parks, industrial development, commercial recreation, residential development, tourism development, forest and wildlife management areas, and to meet a variety of other needs associated with local communities and government agencies.

Shortly after its creation in 1933, TVA began a massive dam and reservoir construction program that required the purchase of approximately 1.3 million acres of land for the creation of 46 reservoirs within the Valley region. Of these 1.3 million acres, approximately 509,000 acres have been sold or transferred from TVA’s control. The majority of this land was transferred to other federal and state agencies for public use. Of the remaining land, approximately 470,000 acres were inundated when dams were constructed. Now in the form of lakes and widened rivers, this land provides recreation opportunities for many people. Thus, approximately 293,000 acres of land are adjacent to the reservoirs that TVA currently manages for the benefit of the public.

The reservoir system in the eastern Tennessee Valley was primarily planned to protect Chattanooga from flooding. At least one reservoir was built on each of the five major tributary rivers above Chattanooga with enough space to store floodwaters from large storms in the drainage areas above them. These seven reservoirs do the main work in controlling floods: