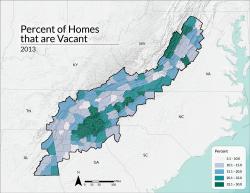 Percent of Homes that are Vacant, 2013 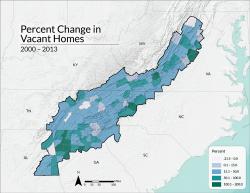 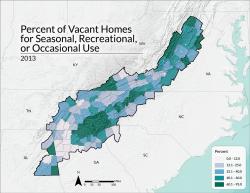 Percent of Vacant Homes for Seasonal, Recreational, or Occasional Use, 2013

Housing vacancy status has commonly been used as a basic indicator of an area's housing market, as it provides information on the stability and quality of housing as well as how housing is generally used. For example, it can show changes in demand for housing, identify rates of housing turnover, and allow a better understanding of an area's demographics, such as economic levels.

There are several vacant housing types that fall under this classification. Vacancy status includes homes for rent or sale, those that are rented or sold but not yet occupied, homes occupied by migrant workers (such as migrant farm or cannery employees), abandoned homes, and homes used for seasonal, recreational, or occasional use.

Regionally, about 15 percent of total homes are classified as vacant, compared to 12.5 percent nationally. The highest rates of vacancy within the region occur primarily in the counties of the Blue Ridge. Avery County, North Carolina, has the highest rate, at 48.7 percent. Compare this to the highest vacancy rate in the nation: 78.7 percent in Hamilton County, New York, considered one of the least densely populated counties in the eastern United States. What these counties have in common are their rural characteristics—typically, counties with high proportions of public land tend to have higher vacancy rates. Similarly, they also tend to have fewer rental homes and more seasonal or recreational homes.

Homes for Seasonal, Recreational, or Occasional Use

Homes used or intended for use only in certain seasons, on weekends, or other occasional use throughout the year fall into the vacancy classification. They might include homes used for recreational activities, such as beach cottages or hunting cabins, or homes used for visiting popular tourist destinations. They could also include second homes used to escape harsh winters or hot summers. Shared-ownership or time-sharing units are also included here.

Of the region's vacant homes, 36.3 percent are considered vacant for seasonal or recreational use; only 5.6 percent of the region's total number of housing units falls into this classification. Again, the counties within the Blue Ridge have the majority of the region's seasonal housing units, with Pendleton County, West Virginia, having the highest (94 percent).

The number of seasonal homes tends to be higher in more rural areas, which provide access to cultural and natural resources and scenic views. These factors—coupled with an ideal mountain climate compared to the surrounding southeastern U.S.—has gained national attention and has made much of the region a tourist destination. Typically designed to be isolated and private, seasonal homes are usually positioned to best enjoy the natural beauty of the region, but they often lose connectivity to the greater community and its infrastructure.

When analyzing this data, it is important to consider the amount of vacant structures within each county, as well as the total number of housing units overall.