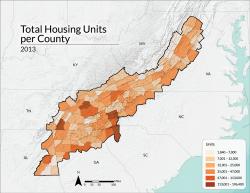 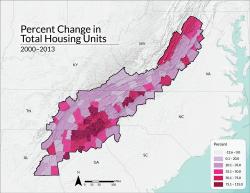 Housing is quite variable across the Southern Appalachian region, and can be compared based on a variety of metrics. The first map shows the number of housing units per county. This map resembles the total population map for the region—the more people you have, the more houses you need. The next map shows the change in housing from 2000 to 2013, and is an indicator of where housing markets sought to adjust to certain economic or demographic shifts, such as with changes in population or with growing interest in certain tourist destinations. 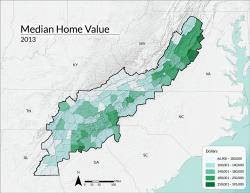 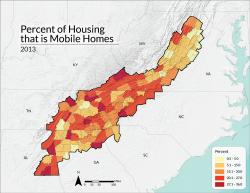 Percent of Housing that is Mobile Homes, 2013

Home value is the estimate of how much the property (including housing unit and lot) would sell for, if it were for sale. An area's median home value provides information on neighborhood quality, housing affordability, and wealth. The median home value for the Southern Appalachian region is about $141,000, lower than the national median home value of $177,000. This lower value could be due to the rural nature of the region, and the economic characteristics that come with that designation. Housing unit type, too, can factor into home value.

Mobile homes, for example, are more affordable options for many individuals. Nationally, 6.5 percent of all housing unit types are mobile homes. In the Southern Appalachians, the percentage of mobile homes is much higher, at 16.4 percent, and they are distributed evenly throughout the region. They are primarily associated with rural areas, but can occur in or near urban counties.

The type of housing unit that dominates an area can serve to aid in infrastructure planning, such as with roads, hospitals, utility lines, schools, playgrounds, shopping centers, emergency preparedness plans, and demands for energy consumption.