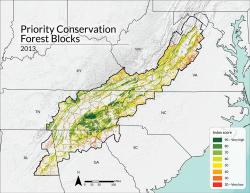 Conservation of wildlife habitat ensures a healthy ecosystem. The Southern Appalachians have been identified as a biological hotspot. Due in many respects to the diverse terrain and difficulty in getting to many of the more remote locations. Recently, over 400 species across the southeast have been identified for potential review on the threatened and endangered species list with the Fish and Wildlife Service. Protecting the habitat of many of these species will require careful planning and research in the years to come.

One such approach, to support efforts by state agencies to update their individual State Wildlife Assessment Plans (SWAPs) for climate change, was conducted by the Open Space Institute. Their assessment of important areas to protect was designed to help state’s standardize their protection efforts. The project developed standard data layers that illustrate ecological connectivity and associated wildlife habitat corridors at the landscape scale. In addition, a standard analytical approach to climate change vulnerability was used. Priority conservation forest blocks were created in a multi-step ranking process, and are shown for the Southern Appalachian region in the accompanying map.

The project assembled corridors and modeled aquatic features in a series of combined resource layers and compared them to climate change vulnerability models to identify “at-risk” habitat and potential acquisition, restoration, or other opportunities to enhance land management. The project also identified key regional-scale priorities for SWAP-related land protection and restoration projects in a sub-region of the Southern Cumberland Plateau and Southern Ridge and Valley regions in Georgia, Alabama, and Tennessee. The project area included the greater Southern Appalachian range of Alabama, Georgia, Tennessee, North Carolina, South Carolina, Kentucky, and Virginia.