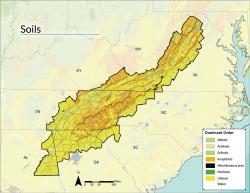 Soil is a critical support system for the natural system, providing water and nutrients to trees and other plants and playing an integral role in all other biological systems. Influenced by several factors, the formation of the region’s soil is dependent on topography, geology, climate, vegetation, elevation, and time—it takes as long as 250,000 years to produce three feet of soil. The parent material is predominantly broken-down crystalline rocks composed of varying degrees of mica content and metasedimentary rocks. Soil nutrient availability is affected by varying precipitation levels in the region, which range widely from 40–80 inches annually. The interaction of these factors has led to unique and highly variable soil patterns and properties across the mountain region.

Soil also is a critical support system for the human system. Early settlers in the Southern Appalachians looked for good soil in fertile valleys to support their farms; different types of soil yielded good clay for pottery and ceramics, while others contained good components for making cement and concrete.

Soil and highly weathered rock derived from the underlying bedrock is generally thinner in the Blue Ridge than in the Piedmont. Also, soil on mountainsides is eroded and moved downslope by water and gravity more readily than on the flatter Piedmont slopes. This transported soil forms large, deep deposits at the foot of many mountain slopes. The deposits can yield productive forest soils and sources of groundwater, and can also indicate where future landslides may deposit material.

Soil types are further categorized by permeability, porosity, and texture. Permeability is how quickly water moves through soil and the ability of water to be held for plant use. Permeability is partially affected by porosity, which is the amount of empty space between soil particles. Soil texture (the proportion of sand, silt, and clay) is an important determinant of drainage, water-holding capacity, aeration, susceptibility to erosion, organic matter content, and buffering capacity. These factors mean that different soils are able to hold and transport different amounts of groundwater. In the Blue Ridge province, soils are generally thinner and not continuous enough to provide reliable groundwater sources. Shallow wells into these layers perform well when there is plenty of rainfall, but usually dry up during extended periods of drought.

Three major soil systems are found in the Southern Appalachians, where their differing properties relate primarily to elevation change: