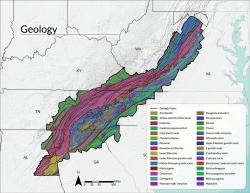 The formation of the highly weathered Southern Appalachian mountain range began with mountain building between about 1 billion and 265 million years ago. Uplift renewed about 65 million years ago, and the modern landscape began to form. The range now consists of bedrock formed from the re-crystallization of sedimentary, volcanic, and igneous material.
In the Blue Ridge Province (shown in blue in Western North Carolina), erosion of uplifted mountains of resistant metamorphic and igneous rocks has produced a rugged landscape. These exposed rocks are some of the oldest rocks in the nation (i.e. from Cambrian or Paleozoic Eras).

The overall southwest to northeast trend of the landscape results from a similar pattern in the underlying rocks and structures imparted during the early mountain building events. The Appalachians formed in a similar manner as the current day Himalayan mountain range are forming. Here in the Appalachians, the old African plate collided into the North American plate and a large mountain range formed that ran from the Southern Appalachians to the Northern Appalachians and continued to what is now the Highlands of Scotland. The mountains were much higher in elevation hundreds of millions of years ago, as erosion has continued to wear away the rock over the years.

Geologic faults and fracture zones are shown as black lines on the map at right. A geologic fault is a crack in the earth’s surface, across which there has been significant offset or displacement. This means that—on the ground—faults represent zones where rock types and ages are very different on one side of the fault versus the other. A prime example of a fault is the long, linear topography along the Brevard fault zone in North Carolina and South Carolina. The Brevard Fault Zone—one of the longest and oldest faults in the country—is coincident with the Eastern Continental Divide in many areas.

Streams and rivers cut down through the mountains along less resistant rock types and along faults and fracture zones. Many streams that flow northwest or southeast follow trends of post-Paleozoic fracture zones in the bedrock that favor preferential downcutting and erosion by water. As streams and rivers influence the landscape, rock types—in turn—can influence streams and rivers by impacting the chemistry and stream flow. Limestone and dolomite, for example, can lead to the formation of Karst topography—or underground drainage systems—where the landscape is formed by the dissolution of soluble rock. Additionally, some rock types such as coal deposits and other related bedrock can affect water quality by fostering certain land uses over others.

On the western edge of the Blue Ridge Province, there is a major geologic fault zone called a thrust fault. A thrust fault is where old rocks have been pushed up over younger rocks during compressive mountain building events. The color change on the map from blue on the east to purple on the west indicates the older blue rocks being thrust over much younger Mississippian rock.

Within the Ridge and Valley, there are numerous fault zones (shown as black lines) which are thrust faults that set up smaller mountain ridges. As erosion has continued over the past 100 million years, the harder rocks have eroded less than the softer ones, so the fault zones show up as steeper mountain fronts. These are north-northeasterly trending folds causing valleys and ridges.

Other important areas include northern Virginia and eastern West Virginia, as well as a younger group of rocks located to the west of the much older Appalachian Mountain Front. This is a sedimentary rock dominated geologic basin. Sedimentary rocks are rocks that include sandstones and shales, and are composed of old, eroded rock that has been deposited and hardened by pressure and depth of burial. Geologic basins are areas where this type of rock is deposited. As explained in the Energy Resources section, this basin is the location of hydrocarbon deposits, rocks and associated fluids that are formed in sedimentary basins and holds most of the coal fields in the area.

One other map that should be explored is the landslide hazard map. There is a strong relationship between landslide hazards and the dominant rock types show on this map.