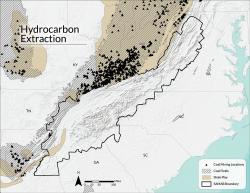 On the accompanying map, note that hydrocarbons (coal, oil, and gas) are found in the “back basins” to the west of the Appalachian mountain front, but are largely absent from the region. These hydrocarbon deposits are found in Mesozoic-age sedimentary rocks stretching from northern Alabama through Tennessee and into Virginia and West Virginia, and are more numerous in the north-central part of the region due to greater thickness of the organic rocks in this location. Small coal mines do exist in northern Alabama, but the coal is not of high quality and is of limited quantity. Also, notice where shale gas play and coal play overlap. This source of natural gas was first exploited with vertical wells and is now a location for fracking technologies to be employed. 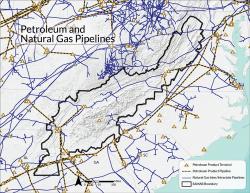 The majority of the gasoline, propane, natural gas, and other petroleum products consumed in the southern Appalachians are extracted from the Gulf Coast or offshore of the Gulf of Mexico, or are imported from foreign sources and delivered to ports along the Gulf Coast. The raw crude oil is refined at oil refineries and then pumped into pipelines.

The main Colonial Pipeline runs through Atlanta, Charlotte, and Raleigh, with a western spur serving Chattanooga, Nashville, and Knoxville. Much of the gasoline is then trucked from Petroleum Product Terminals. Much of Western North Carolina is serviced from Spartanburg, SC.

Most notably, the majority of the region lacks connectivity to hydrocarbon pipelines due to limitations imposed by steep terrain. Natural gas pipelines are more numerous and provide service to many smaller communities directly, but the limited access to much of these gas distribution lines has many residents in the Southern Appalachians dependent on wood, oil, and propane for heating their homes. 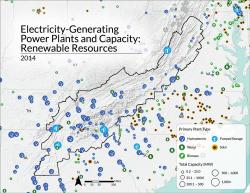 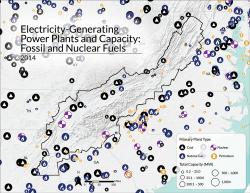 Most of the electricity in the region is generated from coal, natural gas, and nuclear sources. Many of these power plants are actually located outside the region and require long-distance transmission via high voltage lines. A large amount of the energy generated at a plant is lost via this long-distance transmission due to line resistance and heat generation. Other energy is lost by the energy cost of transporting coal by train cars and hydrocarbons via pipelines.

A more efficient means of electricity provision would be through a local generation model. Small renewable power generation plants can be found throughout the southern Appalachians, but these are only providing a fraction of the region's total energy needs. Energy efficiency programs can help reduce demand and various energy sources can be used to supply future demand from constructing new generation facilities to electric utilities contracting with others to provide needed electricity, including renewable generation.

To accurately determine whether energy resources are sufficient to supply power to the region, one has to compute electricity demand, determine capacity needs, estimate the energy supply and the gap to meet the supply.