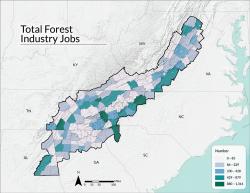 Forests have long shaped the landscape of the Southern Appalachians. Forest products have been vital for subsistence and commerce. A majority of the region’s forests have been harvested since the mid-1800's, establishing an industry based on sustained timber growth and production. Increasingly, however, competing uses of forest lands and its resources have been impacting the ways in which forests are being used. Watershed protection, scenery for tourists, wildlife habitats, and suitable sites for recreation and development are competing uses that impact the management of timing and location of timber harvests. Additionally, areas with strong timber markets and working forests not only support ecosystem services such as clean water and wildlife habitat, but can also provide economic and social benefits through jobs in the forest industry. Throughout recent decades, region-wide demographic shifts and changes in land ownership and land use potential continue to bring new challenges to the region's timber economy.

The individuals, corporations, and government agencies that manage land differ in their goals and approaches to forest management. Government agencies manage a little over 20 percent of the timberland in the Southern Appalachians—a small amount compared to that in the western United States—but a significant figure as this is the largest concentration of public lands in the eastern United States. The federal share of timberland in the region's individual counties, for example, ranges up to 69 percent, and can pose a significant influence on the local timber production economy.

Covering more than 26 million acres throughout the region, the high degree of diversity in tree species can complicate timber markets, as a single stand of trees may include a variety of potential forest products with widely varying market values. For example, depending on the species, size, and quality of logs, timber values can range from less than $100 to more than $800 per thousand board feet.

The U.S. Census Bureau's American Community Survey (ACS) produces data about sector employment, which can be useful in developing county-level information relevant to forest industry. The National Cohesive Wildland Fire Management Strategy has used ACS data, for example, to create a Forest Industry Jobs measurement (percent of total county employment). This can be used as an indicator of areas that have stronger or weaker job markets in the production of timber and nontimber forest products.