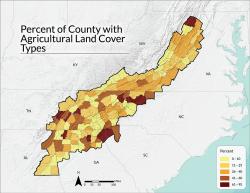 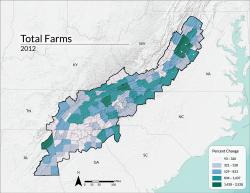 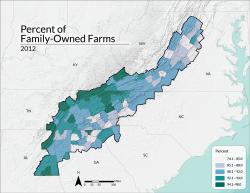 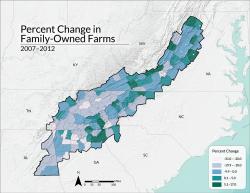 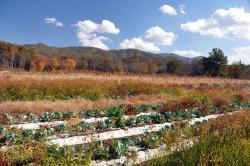 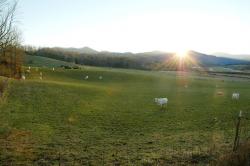 The Southern Appalachians have long had traditions rooted in agriculture, although the terrain characteristics of the region are so significant in shaping its ecology that it is impossible to discuss the region's agriculture without referring to these features. They account for the great diversity of plants and animals, the climate and soils, and largely for where people choose to live, thus shaping the cultural and economic aspects of the region. The eastern portion of the region is dominated by the Blue Ridge Mountains, which rise abruptly from the Piedmont province. These mountains formed a significant barrier to early European settlement, but once traversed, the pastures of the Ridge and Valley province helped to provide the agriculture necessary for continued western expansion. Region-wide, much of the development has occurred in this province, as its lower-lying valleys were more suitable for settlement and transportation. Much of this development, however, came at the expense of forestland, cropland, and pasture.

The steep slopes of the predominantly mountainous landscape made much of the region less hospitable to transportation and large-scale farming, so many of the early economic centers were built around smaller, family-owned operations. Each mountain homestead functioned as a nearly self-contained economic unit, depending upon the land and the energy of a single family to provide food, clothing, shelter, and other necessities of life. Whereas farms in the Midwest and non-mountainous South moved steadily toward single cash crops, mountain family farms remained essentially diversified and independent. By 1880, Appalachia contained a greater concentration of non-commercial farms than any other area of the nation.

These communities were primarily formed in valleys and around creek and river drainages. Until the supply of relatively flat land ran low, the steeper slopes remained in forest or pasture. This continues to be characteristic of much of the region, as population growth still occurs primarily around major urban centers, where opportunities for employment are more abundant. The rural landscape has not been without change, however, as the availability of the region’s natural resources have historically—and at present—become more easily accessible and in higher demand.

New economic prosperity at the onset of the 20th century and the advancement of many tools and techniques accelerated interest in the region’s natural resources, from the harvesting of its timberlands to vast mineral and energy extraction operations. Throughout the century, extractive industries such as logging and coal mining competed with mountain farmers for the use of the woodlands, which often saw large tracts of mountain land and even valleys being bought up by companies to build railroads, mines, and mills.

Losing much of their mountain farmland to extraction, many family farmers throughout the 20th century switched from livestock grazing to other crops that could feed their families, and many more took jobs in the manufacturing, mining, and timber industries. This changed the shape of the region’s economic landscape. The effects of this change are still felt today, as the area continues to experience a loss in smaller, family-owned farming operations—the region saw a 7 percent decline in small family farms from 2007 to 2012.

Today, the region’s agriculture exists primarily in the larger valleys within the Ridge and Valley and Piedmont ecoregions, where level terrain allows for more intensive commercial agricultural operations. Agriculture continues to compete with other economic sectors—including industrial, commercial, and residential development—for use of this flat, suitable land.

From USDA's 2011 National Land Cover Dataset, pasture and cropland land cover types occupy approximately 17 percent of the region, although the amount of these land cover types that are actively and currently being used for agricultural operations is not known using this dataset.