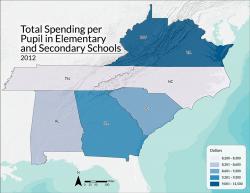 Total Spending per Pupil in Elementary and Secondary Schools, 2012 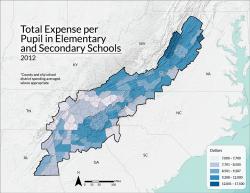 Total Expense per Pupil in Elementary and Secondary Schools, 2012 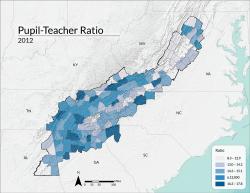 Spending for fiscal year 2012 in the public elementary‐secondary school systems in the Southern Appalachians totaled over $11 billion. Regionally, the average amount of expense totaled nearly $9,000 per student. Four of the region's seven states and 95 of the 150 counties spent nearly this average (at least $8,601 per pupil). This amount, however, covers many of the school's support services, operations, or maintenance costs per pupil, along with student instruction.

The amount spent solely on student instruction totaled $6.1 billion—nearly 55 percent of total student spending—and had a regional average of $5,650, with 66 of the 150 counties spending at least that much. In 31 counties (19 of which are in Tennessee), less than $5,000 was spent per pupil on instruction, with the lowest spending in Union County, Tennessee ($3,303). The most spent on instruction was in Highland County, Virginia, at $11,507. Many factors could contribute to such a wide difference in spending, including county population, as areas with higher populations are likely to have more students. Union County, Tennessee, for example, has a population of approximately 19,000, compared to Highland County's 2,000.

Student enrollment per county reflects the distribution of younger populations, which is typically higher and more concentrated in urbanized areas. This is reflected in the student-to-teacher ratio, which typically has larger class sizes per teacher. School districts containing more students, then, may have less resources to support per-student instruction. Where poor educational attainment is generally associated with rural areas, they are now also likely to occur in urban areas, where there may be less resources per student.