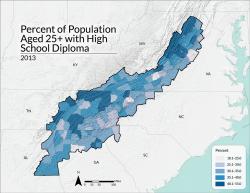 Percent of Population Aged 25+ with a High School Diploma 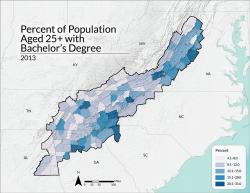 Educational attainment data are useful as a measure of regional economic health, as adults with higher education levels are more likely to locate in places offering the most economic opportunity. They are also useful in assessing the socioeconomic condition of the region's population, as many government agencies require these data for funding allocations and program planning and implementation.

The maps at right show the highest level of education attained per county. Regionally, almost 35 percent of adults over the age of 25 have earned a high school diploma as their highest level of education—a population largely found in the more rural counties. For example, Hampshire County, West Virginia (53 percent), Morgan County, Tennessee (52 percent), and Hardy County, West Virginia (48 percent) have the highest percentage in the region of individuals with high school diplomas as their highest level of school completed. Each also has a population density of less than 50 people per square mile.

The Southern Appalachian region's rural nature may account for these percentages being much higher than the national average of 28 percent.

The national average for individuals over the age of 25 who have earned bachelor's degrees as their highest level of school completed is 18 percent, compared to 12 percent for the Southern Appalachian region. As individuals earn bachelor's degrees, they are likely to locate in or near urban centers for the increased employment potential. This is corroborated by the regional data: counties with higher percentages of individuals over 25 with bachelor's degrees tend to be those with higher population densities, those near urban centers, or those that support large university communities. Forsyth County, Georgia, has the highest percentage of these individuals in the region, with 30 percent, followed by Albemarle County, Virginia (26 percent), and Cherokee County, Georgia (24 percent). Both Forsyth and Cherokee Counties are in the greater Atlanta metropolitan area, while Albemarle County contains the independent city of Charlottesville, home to the University of Virginia.