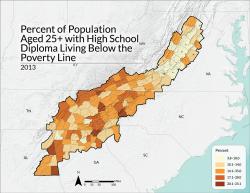 Percent of Population Aged 25+ with a High School Diploma Living Below the Poverty Line, 2013 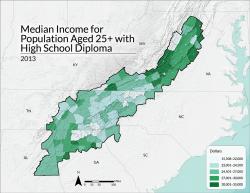 Median Income for Individuals Aged 25+ with a High School Diploma , 2013 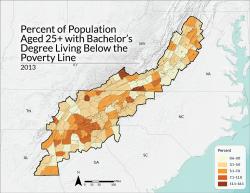 Percent of Population Aged 25+ with a Bachelor's Degree Living Below the Poverty Line, 2013 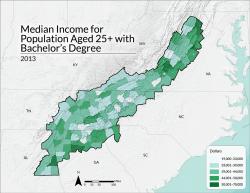 Economic status is largely associated with one's educational attainment, and employment opportunities vary based upon the skill sets, experience, and the education one has earned.

In the Southern Appalachian region, nearly 15 percent of adults over 25 who have earned a high school diploma as their highest level of school completed are living below the poverty line. This is slightly higher than the national average of 13.7 percent. Regionally, this statistic ranges from a low of 3.8 percent in Highland County, Virginia, to a high of 25.1 percent in Norton County, Virginia. Having many of the lowest and highest percentages, it would appear that Virginia is quite diverse in its economic profile, perhaps speaking to the rural and urban realities found throughout the Southern Appalachian portion of the state. For example, of all the counties and independent cities in the Southern Appalachian region that have less than 10 percent of their adults in this category, all but three are found in Virginia. Conversely, Virginia has five of the 12 counties and independent cities with estimates of this population over 20 percent—the highest category in the accompanying map.

Regionally, the average annual median income for individuals over 25 with only a high school diploma is $25,800, nearly $2,000 less than the national estimate of $27,500. Once again, the cities and counties within Virginia stand out. Within the Southern Appalachians of Virginia, the average annual median income for those with only high school diplomas is also $27,000, the highest among the region's cities and counties of any other state.

The lower median incomes throughout the region are found in more rural areas, which may be due to the lower number of available jobs in these areas.

The percent of individuals who are over 25 years of age, living below the poverty level, and who have earned a bachelor's degree as their highest level of school completed is markedly less than those who are in poverty but have earned only a high school diploma. The regional average for those with bachelor's degrees living in poverty is 4.8 percent, and ranges from a low of 0.6 percent in Dickenson County, Virginia, to a high of 15.6 percent in Grayson County, Virginia.

The majority of the counties and independent cities that have these lower values, however, tend to also have lower rates of college graduates. For example, Dickenson County, Virginia—the lowest value in the region—had a bachelor's degree attainment rate of only 6.2 percent. Given this, a helpful measure of the job economy throughout the region may be to examine the percentage of the population who have completed college compared to the rate of those living in poverty with said degree. Grayson County, for example, has 15.6 percent of its college graduates (aged over 25 years) living below the national poverty level, but has only 7.8 percent of its adult population with bachelor's degrees.

Once again, the urban and rural realities of the region may be the influencing factor behind young professionals finding employment that supports a living above the poverty level. Regionally, the average annual median income for those over 25 years who have obtained bachelor's degrees is nearly $41,000, compared to the $50,000 national average.