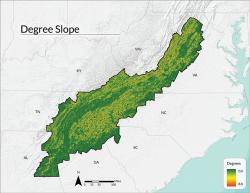 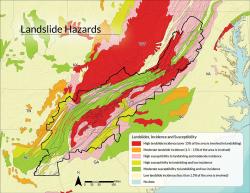 Landslides are the result of natural geologic processes that have worked to shape the landscape among the mountains of the Southern Appalachians, and are hazards endemic to mountainous regions all throughout the world. Landslides are defined as the rapid downward movement of a mass of rock, earth, or artificial fill on a slope. This mass of rock and earth is called a landslide deposit. Mudslides are the most common type of landslide in the Appalachians. Mudslides occur when unstable soil, rock, and earth become over-saturated with water during periods of extended, heavy rainfall. These types of rainfall events are often linked to tropical storms.

Throughout the Appalachians, many homes have been condemned due to their locations on landslide paths. Losses can be reduced by the implementation of proper location design, construction, and maintenance of building developments on steep mountainside slopes. Another loss reduction strategy is siting buildings and other structures away from landslide pathways, as landslides may travel on flatter slopes, often along stream valleys.

The frequency and severity of landslides is considerably less in the Southern Appalachians than in some other areas of the United States—such as in California and the Pacific Northwest—primarily due to specific factors guiding our geology, climate, and vegetation. The Landslide Hazards map shows brighter colors within the SAMAB region, but also show how these risk-related areas extend beyond the region's borders. Risk is depicted using a “traffic light” color palette: the highest risk areas are illustrated in red, with the next highest risk areas in orange and pink; lower risk areas use the yellow and green areas.