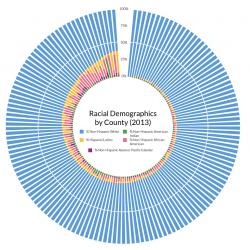 Racial distribution within the Southern Appalachians varies greatly from national estimates, and varies greatly among the region's counties as well. Overall, there is little racial diversity in the region, with the prominent race being non-Hispanic white—which accounts for 84 percent of the region's population, compared to 63 percent nationally. Non-Hispanic African-Americans make up just over seven percent, Hispanic/Latinos make up six percent, and Non-Hispanic Asians and Pacific Islanders make up nearly 1.5 percent of the total population.

Once the region's prominent racial group, Non-Hispanic American Indians now only represent a fraction of the population—less than .5 percent. Swain and Jackson Counties in North Carolina have the region's largest American Indian populations, at 24 and 9 percent, respectively, due to the presence of the Qualla Boundary and the territory of the Eastern Band of Cherokee.

The graphic at right illustrates the region's racial distribution. With each bar representing a county or independent city (independent cities are within Virginia only), communities are sorted by percent of non-Hispanic white—from highest to lowest—going clockwise around the wheel. Using this arrangement, it is evident that no area within the Southern Appalachian region has less than a 60 percent non-Hispanic white population. Highland County, Virginia, has the highest percentage of non-Hispanic whites—at 99.9 percent—while Whitfield County, Georgia (near the Atlanta metropolitan area), has the lowest, at 62 percent.

It should be noted that many of the counties and independent cities with higher percentages of non-whites contain or are neighbors to a major metropolitan area. The exception here is Swain County, North Carolina, which is largely rural.