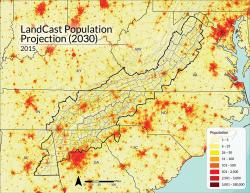 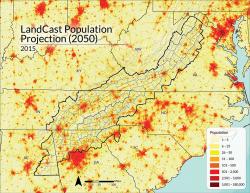 Developed by the Oak Ridge National Laboratory (ORNL), the LandCast 2030 and 2050 High-Resolution Population Projections model future national-level human population densities. The models estimate the probability of a population being at a particular location, which measures where people will likely be in the future—not necessarily their places of residence.

Current population density and factors related in predictable ways to population density (such as land cover, slope, road proximity, distances to larger cities, and additional data) were included in model development, along with a projection methodology modified from the U.S. Census. Future projections using the models are potentially useful in planning efforts to minimize impacts on areas facing population growth or decline, in addition to other research and education uses.