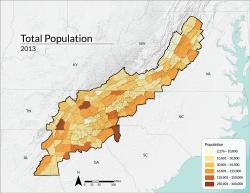 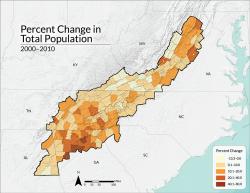 Between 1970 and 1990, the population of the Southern Appalachians steadily increased by over 1.2 million—with two-thirds of this growth occurring during the decade between 1970 and 1980. Prior to 1970, the region’s population had been decreasing due to a lack of employment opportunities for young people and few accommodations for the elderly. Throughout the remainder of the twentieth century, however, all of the counties of the region experienced high population growth percentages, with the exception of counties containing metropolitan areas; these already had high population bases.

From 2000 to 2010, population growth was less constant throughout the region, with the majority of growth occurring around urban centers and decline occurring primarily in rural areas. A slowing economy and gradual shifts away from previously dominant employment sectors—such as manufacturing and agriculture—likely helped to encourage this pattern, as individuals sought the diverse employment opportunities and higher wages found near metropolitan areas.

There are exceptions to this trend. Many rural counties experienced population growth due to the arrival of older populations seeking to retire in areas with milder climates, scenic views, and the potential for outdoor recreation. Interestingly, many of the independent cities within Virginia are also exceptions. This might be due to increasing costs of living in these urban areas, which could see younger professionals moving outward to surrounding counties and commuting into urban centers for work.

According to the 2013 U.S. Census, the counties with the largest populations contained major urban centers: the highest population was in Greenville County, South Carolina, home of Greenville; Knox County, Tennessee, with Knoxville; Hamilton County, Tennessee, with Chattanooga; and Buncombe County, North Carolina, with Asheville. The counties with the region's lowest population were situated in the Ridge and Valley ecoregion in northwest Virginia.