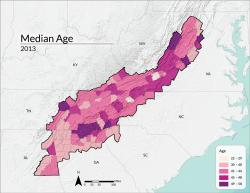 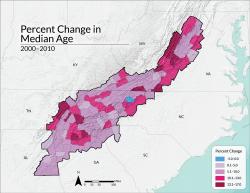 Young adults, particularly those with college educations, tend to migrate towards places that offer the most economic opportunity, while areas with less vibrant economies often experience a loss of talent, skills, and young adult workers. The result of this migratory trend is an increase in the median age.

For the decade of 2000 and 2010, most of the counties in the Southern Appalachian region saw their populations age: the regional average median age increased eight percent, and few counties experienced growth in their younger populations.

Only five of the region's counties actually got younger via a decline in median age, with the largest decline seen in Watauga County, North Carolina—home of Appalachian State University—with a median age of 28 years. In fact, three of the four other counties with declining median ages each contain universities. The exception is Waynesboro, Virginia, with a median age of 38.

The average median age for the Southern Appalachians is 41 years, compared to the national average of 37 years. The majority of the region's older populations are located in the communities within the Blue Ridge ecoregion, such as in northern Georgia and southwestern North Carolina. Highland County, Virginia, however, has the highest median age of 58 years. Younger populations are mostly within the independent cities of Virginia, such as Lexington and Radford (both with median ages of 22 years), Harrisonburg (23 years), or Charlottesville (29 years).