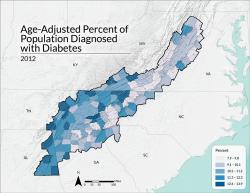 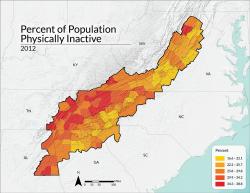 The health of an area’s population reflects its ability to adapt and self-manage when facing physical, mental, or social challenges. A healthy population is likely to be linked to activities or behaviors that encourage a focus on quality of life.

Diabetes, generally defined, refers to having high levels of blood glucose resulting from complications in insulin production or insulin action. Depending on the type, diabetes can be associated with older age, obesity, physical inactivity, race or ethnicity, and family history, among other factors. Type 2 diabetes, for example, is linked to inactivity and poor nutrition, whereas Type 1 diabetes is a chronic condition in which the pancreas produces little or no insulin and is not linked to behaviors or decisions concerning health. Along with kidney failure and blindness, Type 2 diabetes has been reported as a leading contributor to heart disease, stroke, and depression, and can also lead to non-traumatic amputation.

The American Diabetes Association estimates that one of every five health care dollars is spent on treatment for diabetes, and that one of every ten health care dollars is spent for circumstances that can be attributed to diabetes. After adjusting for age and other demographic factors, it is estimated that annual health care expenditures among people with diabetes are 2.3 times higher than those for people without diabetes. Studies have shown that lifestyle modiﬁcations—such as dietary changes, increased physical activity, weight reduction, and anti-stress techniques—supported by a continuing education program can reduce the incidence of diabetes and, among persons with diabetes, the need for treatment of the disease and its complications.

Obesity is considered a widespread health problem in the United States: during 2011–2012, 34.9 percent of American adults were obese. The U.S. Centers for Disease Control and Prevention use height and weight to define obesity through body mass index (BMI). Adults with a BMI greater than 30 are considered obese. You can find more information about BMI, including a BMI calculator, on the CDC website Health risks associated with obesity are numerous, but include heart disease (the nation’s leading cause of death), Type 2 diabetes, and certain types of cancer—some of the leading causes of preventable death.

In 2012 in the Southern Appalachian region, the percentages of adults diagnosed with diabetes ranged from 22.5 percent in Buncombe County, North Carolina, to 38.1 percent in Clay County, Alabama.

Physical activity, along with a healthy diet, is recommended for reducing weight and managing some aspects of diabetes. Although rates of physical activity in 2012 for adults in the Southern Appalachian region (27.4 percent) are less than those in the rest of the nation (27.7 percent), there are still many adults who are not physically active, and rates of physical inactivity are often related to rates of obesity and Type 2 diabetes.