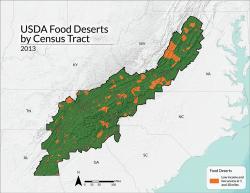 As reported by the U.S. Department of Agriculture (USDA), food is generally considered to be a “normal good,” meaning that the demand for it increases as income increases. Given this, it should not be surprising that higher-income areas typically have relatively more grocery stores and restaurants than are found in lower-income areas. With median income for the region falling below national estimates, communities within the Southern Appalachian region generally have less available food resources compared to communities outside the region.

According to the USDA Agricultural Marketing Service, food deserts are defined as “urban neighborhoods and rural towns without ready access to fresh, healthy, and affordable food.” The USDA categorizes food deserts by census tract—a small, relatively permanent subdivision of a county usually containing about 4,000 people and 1,600 housing units used by the U.S. Census Bureau for statistical purposes.

Food deserts are designated by the USDA for census tracts which:

Communities within census tracts identified as food deserts may have low access to healthy and affordable food for different reasons. There may be a lack of grocery stores or supermarkets, leaving the communities dependent on fast-food restaurants and convenience stores offering few healthy and affordable food options. Affordability is of great significance: the USDA designation of food deserts incorporates, by definition, low-income census tracts, and residents may not be able to afford fresh, healthy food even if it is available. Access to transportation is another important factor. Low-income residents may not be able to afford to own, operate, and maintain a car in urban or rural settings, and in rural areas public transit services may be sparse or non-existent. Mountainous terrain—such as that found in the Southern Appalachians—may exacerbate situations where access to transportation is a factor.

Within the Southern Appalachian region, 328 of the nearly 2000 census tracts were identified as being food deserts, and they occur both in rural and urban areas.