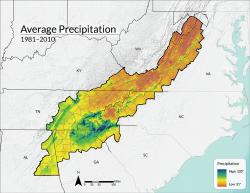 Precipitation is any form of water—drizzle, rain, sleet, hail, snow, graupel (soft hail or snow pellets)—that falls from the sky and reaches the ground. Precipitation is essential to both the natural and human systems; reliable water sources, provided by precipitation, are required to maintain healthy ecosystems and to provide water to human communities. The map displays a 30-year climate normal and looks at average annual precipitation. This precipitation does not arrive at the same rate, either every day or every season. Instead, it is frequently episodic, with periods of drought separated by episodes of extreme precipitation. Heavy rainfall occurs when tropical storm systems cross the area, and at times almost half an annual rainfall total can occur within a single week or month.

The southern Appalachians have some of the most variable average precipitation in the United States, some of which is due to the orographic effect of the mountains on weather systems (when moist air is forced upwards over rising terrain). This can be seen in the blue-green shading on the accompanying map. Much of the region's rainfall is fed from a southerly flow. Compare this map to the hydrography map and see the concentration of rain along the Eastern Continental Divide, with drier valleys in the “rain shadow”—such as Asheville, North Carolina, and the Shenandoah Valley of Virginia. Elevation gradients also contribute to the various forms of precipitation received in the region. For example, lower elevations receive most precipitation as rainfall, whereas the tallest mountain peaks receive up to 50 inches of snowfall each year.