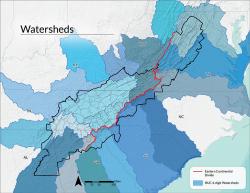 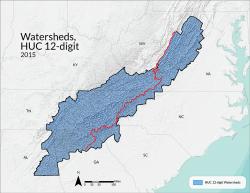 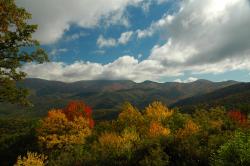 Watershed boundaries define the extent of surface water drainage to a given point, usually a stream confluence, taking into account topographic features and elevation gradients. The USGS Hydrologic Unit Code (HUC) system establishes a framework of drainage boundaries that create a hierarchical system of drainages (i.e., smaller watersheds nested within larger ones). Watershed boundaries are often formed along ridge lines, as surface water flows downslope and converges into water bodies such as streams and rivers.

A river basin catches all the water flowing downhill into streams and creeks and, eventually, carries it out to sea (see the Surface Water section for additional information). River basins are composed of smaller watersheds that drain individual valleys. Within the region, there are many large river basins split by the Eastern Continental Divide. The river basins to the west of the divide drain into the Mississippi River System and flow to the Gulf of Mexico. Basins to the east of the divide drain to the Atlantic Ocean.

These basins contain the headwaters of streams and rivers that provide a critical supply of fresh water to towns and cities in and outside of the region. In fact, the southern Appalachian Mountains serve as "water towers" for the southeastern United States. In other words, the majority of the people living in the Southeast rely on the clean water that flows from the mountains. Decisions that we make regarding water quality and use in the region will have a direct impact on the large population centers that live downstream.

The region’s river basins have some of the most outstanding and diverse aquatic systems within the nation. However, the health of these systems is threatened by human actions such as pollution, impoundments, and poorly mitigated land management activities. Mussels, crayfish, snails, salamanders, and many species of freshwater fish—such as native brook trout—are then at risk due to poor water quality and altered hydrology. Historically, the region has maintained a bountiful supply of fresh water for residential, commercial, and industrial use; however, recent droughts have increased awareness of the need for water conservation.

To view the importance of the region's water assets on a national and regional scale, please access the USDA Forest Service's Forest to Faucets project website. This project uses GIS to model and map the continental United States land areas most important to surface drinking water, the role forests play in protecting these areas, and the extent to which these forests are threatened by development, insects and disease, and wildland fire. For more on the impacts of insects, disease, and wildfire on the watersheds of the region, see Forest Threats.