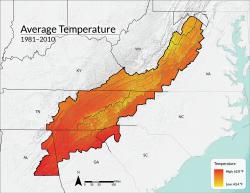 The Southern Appalachian region has a relatively mild climate year-round; however, the terrain of the Southern Appalachians creates a range of average temperatures in the region. On any given day, the difference in temperature may be as much as 20°F. The two most important influences contributing to this variability of the region’s climate are its altitude and its latitude (cooler in the north).

The climate of the region as a whole is cooler than that of adjoining areas, with daytime temperatures averaging in the 30's to 40's for highs in the winter and often falling into the teens or lower on winter nights. The Appalachian mountain range therefore creates a “cooler island” in the middle of a fairly warm southeast. This is true year-round, and has a major impact on many different factors. Planting season starts later in the mountains. Heating degree days are higher in the mountains, but cooling degree days are lower. Snow arrives earlier and stays longer. Relatively cool summers have temperatures only occasionally rising above 90°F.

The dataset displayed is a PRISM dataset and shows the 30-year climate normal mean temperature for the entire year. Other average temperature maps are available for months and seasons of the year and should be examined when making more detailed decisions.